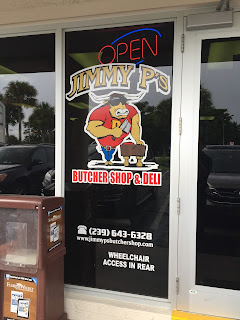 In the search for more BBQ, a friend from work suggested I check out Jimmy P's. Now to be clear, Jimmy P's is a butcher shop first, but also is a lunch deli and a restaurant (which they opened this summer as Jimmy's Charred - it is more of formal plated meals of steaks and chops prepared there.) It isn't your typical BBQ place in terms of appearance or style, but these guys love their meats and the cooking! When I mentioned Texas BBQ, immediately they asked about my experience with Franklin in Austin without prompting. They prepare everything on site and have two smokers (the one I saw was the "inside" smoker) to do the work. They also experiment with different woods - on this day they had prepared beef and pork with Green Oak and White Hickory for the poultry. But they also explained they often use Applewood as well. 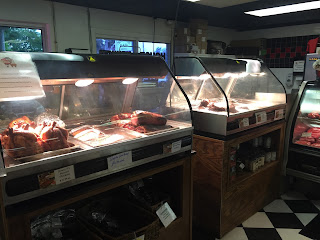 They cook and serve the traditional meats of pork, sausage, ribs, turkey, chicken, and beef (they specialize in Kobe/Wagyu) in their deli. But you can get all the meats cold to take home and prepare (as you would expect from a butcher shop), plus they prepare and cook to take home the more gamey and exotic meats including buffalo, goat, kangaroo, ostrich, rabbit, and venison. These guys never met a meat they didn't like.
(Tom's comment: Where's MY Kobe beef?!?)
For lunch today, I sample the pulled roast pork; wagyu beef brisket (sliced and chopped); and the turkey. I would have tried the pork ribs and sausage, but there was just too much for me to eat.


Roast Pork: Initially, the pork looks a light on color and greasy. But its tender with good flavor in the meat and the smoke is mild. It's good, but not overwhelming. 7.0/10. 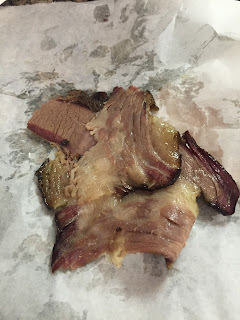 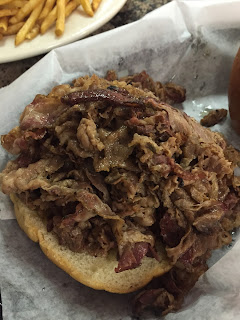 Beef Brisket: The brisket kind of varies depending on whether it is sliced or chopped. The sliced is tender, but no bark - still there is a nice smoke ring. There's a good mix of fat that melts well and makes it very tender and juicy. The smoke is mild, but more consistent - it stays with you in every bite without overwhelming. With the chopped, it remains tender, but the bark is mixed in more and it gives the flavor even more of a meaty and seasoned taste. The smoke is as with the sliced - mild but always present. It's probably the best brisket I have tried recently. 8.5/10. 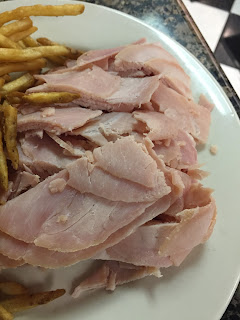 Turkey: As they tell me, the turkey is sliced more like a sandwich lunch meat and less like a meal cut. So it comes off lighter than I expect. The meat is easy to eat, but the flavor is very mild - a little spicy on the aftertaste and you can taste a little charcoal and ash - my guess is that the effect of the hickory (which surprisingly, doesn't overwhelm the meat). Overall, not bad but not outstanding. 6.0/10
Is it worth a visit? Yes. It's a great place to try some good meats and maybe do some shopping for your next dish. You'll get some great help from the butchers too if you have questions.


Is it worth a trip? Not really. I can't say it’s a BBQ place  - I just found they did some good brisket. You'll probably go there more for some specialized meats to take home than as a BBQ haven.


I found the place to be pretty nice, and maybe I'll check it out again to see how the restaurant side works out.