Review of The Pit BBQ  (@Williams Dr. in Georgetown, TX)


I stopped there for lunch today after an appointment. I've driven by in the past, so figured I'd see if it was any good. The place looks a little like a converted fast food place (maybe an Arby's). There's no real BBQ feel on the inside. I order a 4 meat combo plate with brisket, sausage, pork ribs, and turkey. 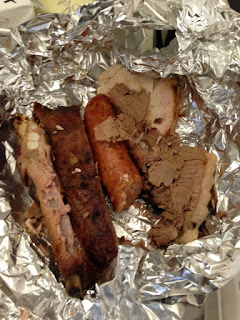 Turkey: The turkey has some smoke flavor and is not too salty. But it is chewy in places and dry in others. Seems a little uneven in the cooking. 6.0/10.


Pork Ribs: I'm starting to notice a theme here - chewy and tough. I actually have to cut one of them with a knife. Not much flavor at all. Fairly poor example of how a rib should be done. 3.0/10.


Is it worth a visit? I'd have to say no. This place may be popular with locals, but I'm not seeing the attraction. The only thing here I found decent was the turkey, and not so much so that it's worth going for. There are plenty of better places out there.


Note: Many years ago a large group of us did a BBQ tour visiting Lockhart and Luling, and Black's in Lockhart was one of the places we tried. Our memory (admittedly this is at least 5 years ago) of the place was decent, but not anything we'd make a trip for.  For the Lockhart location, one of
the strongest selling points would have been sides. That is, you get better BBQ at other locations, but you might get a better overall meal at Black's. (This is our memory anyway).
(Al's comment: Having been on that trip, I think I probably remember their sausage most fondly.)


Having never been here before, Tish and I stopped at the Austin location to pick up some BBQ to take home for lunch. I left my phone in the car, so no pictures from the location. Food appears to be kept on a warming pit behind the counter, and pits are elsewhere on premise.


They have no plate specials, so everything is strictly "by the pound". We order 4 pork ribs, 1 pound each brisket and turkey, and 2 sausage links (links contain wheat and gluten so they are for me only).
Pork Rib: This is disappointing. The one I get doesn't have much flavor besides pork, and has almost no crust. I'm tasting no real smoke or spice on mine. Tish's has a little more crust and a little more smoke flavor. Mine is very chewy in places. 4.0/10 (Tish gives her a 6.0/10).


Sausage: Not a lot of snap in the case. It has a coarser grind than many others. Flavor is decent, but not outstanding. Definitely a "take it or leave it".  5.5/10.


Brisket: Again, nothing really stands out here. Some smoke flavor, but not a lot, and not a lot else going on. Bark is OK but not great. 6.0/10 (Tish concurs).


Turkey: Has a good smoke flavor, but a little salty. It's also just a little on the chewy side. I've had better, but I've certainly had much worse. 7.0/10 (Tish concurs on score, although hers was a little more tender).


In short, this is no different than many other BBQ places in Austin (or Texas). There's nothing really horrible here, but nothing really outstanding.


Is it worth visiting? If you're in the area and decide you want BBQ, sure. They offer family packs, and I can see them being a popular place for people working in the area.


Is it worth a trip? Absolutely not. If you've traveled an hour for BBQ, there are plenty of other places in the area worth spending your time on. This is not one of them.
The Austin location can be found here. In case you want to know our FAQ's for review.
at 4:16 PM 8 comments:

Cooper's Bar-B-Que  Review (Llano, TX)
(Cooper's Old Time Pit Bar-B-Que Website)
(With a jingle no less.)
Mike and I made a trip to Cooper’s BBQ in Llano today to eat some BBQ there and bring some back (Tish loves their sirloin). It’s a decent trip for each of us, and if you’re coming from the Austin Metroplex this place definitely qualifies as a “Trip” (see FAQs post to know what we are talking about). I’ve been there before and always enjoyed the food I’ve gotten.
It’s got a nice homey feel, and the pits are visible from outside. In addition, Cooper’s has the meat visible outside. You point at what you want and they cut it or give it to you. “I want that pork chop”, or “Cut me half that link of sausage”.
Mike orders a variety of things, as he gets his carry-out order at the same time he gets his dine-in food. I just get my dine-in food: going with a piece of original sausage, a slice of fatty brisket, a slice of turkey, a piece of sirloin, and a pork rib. (My to-go order is two pork chops, some cabrito, and a pound of sirloin for Tish).
A general note about their smoke: On almost everything I tried, the smoke flavor is subtle. The rub is definitely the strongest of the flavors. This isn’t necessarily a bad thing, but it is noticeable (some places more than others).
Sausage: In terms of texture, snap of the casing, and moistness, the sausage was prepared just fine. It had a nice snap, wasn’t too chewy, and was very moist. But the sausage has a flavor to it that personally didn’t appeal to me. I’d give it a 5.0/10, but would easily understand that most people would rate it higher.
Pork Rib: The pork rib has a decent crust, and is moist and tender (without being over-cooked). Having said that, this was the one item where the subtly of the smoke harmed the score. The rub flavors didn’t do as good a job as carrying this item as it did with others. At most places smoke would make up the difference, but not here (at least, not with this rib). It’s OK, but not anything outstanding. 6.0/10.


Brisket: The brisket has a nice flavor, is moist and tender, and is really good. Again, subtle on the smoke but the rub compliments it nicely. Couldn’t finish all of mine as my piece was a little too fatty, but good stuff! 8.0/10.


Turkey: Things are improving steadily however. The turkey has a nice subtle smoke flavor, and the rub accents the flavor nicely. My piece is a hair on the dry side, but Mike’s is nice and moist (I should have eaten this first). It’s definitely worth a try. 7.5/10.


Sirloin: Even better than the brisket. My piece is nice and tender. The rub works well, it’s not over-cooked (while I’d call mine medium I suspect most would call it medium rare), and the subtleness of the smoke brings out the flavor of the sirloin. To put a crown on it, my wife will eat it when it is pink. 8.5/10.


Pork Chop: The pork chop is nice and tender, with a good flavor (like the pork loin below). Just the right amount of smoke. Tish has never had it before, and is majorly impressed as well (I may have changed her favorite from sirloin to pork chop). Note: The pork chops here are like the beef ribs most places. I ordered two pork chops, and they came in at just a hair under 3 pounds (about $40). When I brought them home my wife said “$40 for pork chops?!?”  Now that she’s tried them, I have been forgiven and she agrees it was a well-spent $40. 10/10.
Pork Loin: I have to save the best for last. This is juicy, tender, and has an excellent flavor and crust. Just the right amount of smoke. There may be another place that does it differently but as well, but I haven’t had better. 10/10.
Cabrito: A disclaimer here. I’ve only had goat a handful of times ,and never smoked. I found the flavor OK (a little gamey, but well-seasoned). It was a little dry, but this had been reheated (I comment on it because reheating was not a problem with the pork chop). More importantly, the meat/bone ration seems poor. Of my 4/10th of a pound of cabrito, over half of it was bone. Since I’m not an expert here, I’ll give it 5/10. I’d eat it if given to me, but it’s not something I’d order.
So, is it worth a visit? Absolutely. Cooper’s has a wide variety of items, and does an excellent job with most of them. I suspect they have a dedicated regular lunch crowd, and I can see why they are opening a location in Austin proper.
Is it worth a trip? With three scores (so far) 8 or higher, a 7.5, and the sausage score being based on personal taste preference, it’s definitely worth a trip. The quality of the food combined with the atmosphere (and free beans) makes this a place everyone should visit at least once.
Speaking of trip, if you are coming from the Austin area there’s two basic ways: Hwy 71 or Hwy 29. Which is shorter depends on where you are. But (having done both) there are perks to either. Hwy 71 is the prettier trip. Lots of good scenery: trees, rolling hills, etc. If you want the relaxing drive with a great view, go that way. Hwy 29 is the route that’s a little more fun. There’s a 10 mile stretch just west of Burnet where you have nice curves and hills. If you are willing to fudge the speed limit a little* then the drive becomes a lot of fun. The location is noted here.


*If you are a law enforcement officer reading this, that was put in strictly for entertainment purposes. As a law-abiding citizen, I would never..… Al, stop laughing!
(Al's note: I can't! Oh Lord, my sides hurt.)
at 3:41 PM 11 comments:

Micklethwait Bar-B-Que Update ("Mistakes were made")


One thing I think it is important for a reviewer to do is admit when they may have made a mistake. As mentioned earlier, we went to Micklewait BBQ on 5/24. At the time, I loved the brisket, sausage, and chicken, and was less fond of the ribs and pork shoulder. We had ended up with a fair amount of left-overs, and froze them for eating later. During this week I’ve been eating the left-overs.
Even frozen and then re-heated, my opinion of the sausage and brisket has not changed. It’s still flavorful and tender. And the chicken is still moist (incidentally, always best to reheat very slowly and with a moisture source nearby). My ratings on these items has not changed in the slightest.
But the ribs...My wife had re-heated the first batch and handed me a rib. The difference between that rib and the two I had on 5/24 was the difference between night and day. Good smoke flavor all the way to the bone. Just the right amount of bite. Even re-heated I would give this rib an 8, and I suspect it would have been higher fresh.  And the same has been true for every other re-heated rib I’ve eaten.  So, revise that to 8/10.
I don’t know if I just ended up with the only two flawed ribs in the batch, or if my taste buds were being tempermental that day. But it certainly appears their ribs can be top-notch as well.
I’m definitely standing by my recommendation that Micklewait is worth a trip!
-Tom
(Al's editorial: FYI - I erroneously put Micklethwait's in Round Rock on the original posting.  The error has been corrected. Per their website, they can be found here.)
Original review can be found here.
at 2:57 PM 10 comments: