We decided to go somewhere we haven’t been before: Micklethwait BBQ. Micklethwait appears about as Austin as it gets: two trailers in a lot in east downtown Austin. One is where the pits are, and the other is where the food is sold. There’s a small outside dining area. What appears to be a small herb garden is behind the trailers.  Various recycling containers are nearby. There’s a wonderful aroma in the air.
(Al: FYI - it looks like they plan on opening second trailer as Eastern European Delicatessen style somewhere as well.) 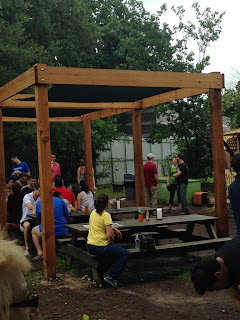 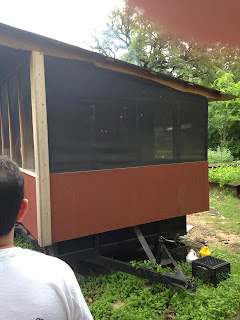 Although Scott, Al, Loni (a friend of ours from The Woodlands), and I were there, this was a pickup run for other friends from out of town. We do end up waiting about 1 ½ hours for our food ( a little over an hour in line to order and about 20 minutes to get it once ready). They were out of some things when we got there, but we were able to make a decent haul: 5 lbs brisket, 4 lbs ribs, 3 lbs sausage, 4 lbs chicken, and ¾ lb pork shoulder.


Pork shoulder: Has some smoke flavor, but is a little greasy. There’s a little flavor in the crust, but not much in the meat. Usually with sliced pork, it’s common that it tastes too salty. This isn’t salty enough (never thought I’d say that). Sauce improves it a little. 5.5/10.
(Al's review: Also found it to be greasy and bland. It's tender to eat, but that's about it. 5/10)


Pork Ribs: Recently I’ve been having a run of flavorful pork ribs that were chewy and had a poor meat to bone ratio. This has a touch of the opposite problem. The ribs are very tender, moist, and have an excellent amount of meat on them. But there’s not a lot of flavor (at least in the ones I had). Some bite in the crust, but the underlying meat is fairly bland. 6.0/10.
(Al's review: Tender and I found the bark was really spicy good. But when you get to the inside meat it goes more bland - like the flavor didn't penetrate all the way through. 6.5/10)


So two items documented, and not great scores. However, things are about to change.


Chicken: Poultry always seems to be a hard one for places to get right. All too often it comes out too dry, or too salty. Not here. My chicken leg is juicy, tender, and has a good smoky flavor. Just the right amount of pepper and salt. This is good stuff. 8.5/10.
(Al's review: Agreed - tender, moist, a little smoky. Did find it better with their sauce mixed in. Purist score: 7/10, otherwise I'd give it an 8/10.)


Brisket: The brisket is nice and moist. There’s an excellent bark on it, with a good smoke flavor and ring. The fatty brisket is not overly fat, but even the lean is flavorful. It’s cut very thick, but is still nice and tender. Good stuff. 8.5/10.
(Al's review: Tender and smooth taste (from the fat mixing in); right amount of smoke and the bark is crispy and flavored well. 8.5/10 as well)


Sausage: Micklethwait apparently changes the sausage every day. Today’s selection was something I’ve never considered before – Goat Chorizo. It is served pre-sliced (I really need to start remembering to ask about that). To be honest, I had no idea what to expect. What I got.. .was impressive. It’s a coarse ground sausage. Nicely spiced with a hint of sweetness. Some pieces are just a touch dry on the outside (because of the pre-cutting), but the insides of most are nice and moist. They did this right. 8.5/10.
(Al's review: Tender and light; right amount of spice but found mine a bit dry on taste. Does the goat chorizo flavor deter from your traditional style? Hard to judge because it remains quite good. 8/10)

Overall, Micklethwait has impressed me.


Is it worth a visit? Absolutely. I suspect if I lived closer I’d eat there quite often. While the pork disappointed a little, they more than made up for it with everything else, certainly enough so that I’d go back (and give the pork another try).


Is it worth a trip? I’d have to say yes. Anytime you can get three scores of 8 or higher, you’re doing things right. The brisket and chicken were excellent and that sausage impressed me (and I want to try some of their other creations).


Usually I won’t comment about the setup of a place, but Micklethwait does warrant it. Should you go, bear these things in mind:


*It’s a trailer. There is no inside dining and you’ll be waiting outside (no shelter). Take weather into consideration. There does appear to be a coffee trailer and a juice trailer on the same lot (although I don’t think the juice trailer was open when we were there).


*Because it’s a trailer, there are fewer people working there, and service is slower than it would be other places. For the length of line I was in, at most places I would expect to have waited about 2/3rds the time before ordering, and had my order filled when I made it. So factor in a longer wait time than normal.


And despite that you really need to give them a try.
(Al's additional word of warning: Supplies are limited each day - they only cook X amount! You may want to go early or have a back-up plan. As we were getting our order, they were kind enough the advise the remaining people in line (and it was probably a good two dozen of them) that they were running low and what they could limit themselves to in ordering.)
at 5:00 PM