I’ve always considered Salt Lick to be as much about the experience as the food. The Driftwood location has a unique atmosphere that everyone should experience once. The BBQ I’ve always considered to be decent but not great. Atmosphere and their All You Can Eat (AYCE) platters were the biggest selling points. I’ve gotten older, so the AYCE isn’t as appealing, and the Round Rock location just doesn’t have the atmosphere that the Driftwood location has. I’ve gotten quite a few adequate meals here. It’s not a bad place to go before or after a ball game.

My friend Al and I made a spur of the moment stop to grab a late night bite (around 9pm). (Incidentally, Al’s a friend from Florida and the tech guy behind this site.) We decide to split a 4 meat plate, and add on a beef rib.
(Al: Hello there!) 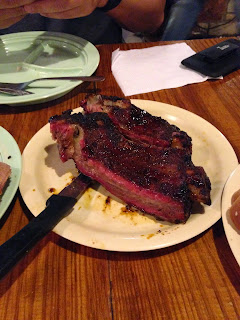 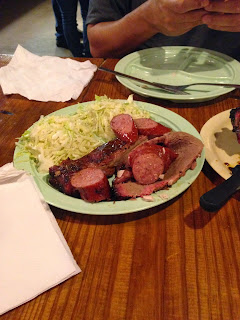 Pork Ribs: Good flavor, moist, but a little chewy. Very little meat on the ribs. The flavor is the same as their sauce, so it appears the ribs may still be getting the wet rub. 5.5/10.
(Al's review: Strong flavor for me, spicy almost to sweet. But agreed on everything else - chewy and not very meaty. It's stretch to get a good chunk of meat. 6.5/10)

Sausage: Served sliced (I had forgotten about that or would have asked them to not slice it). Flavor is decent. Hard to tell about the snap, since it is sliced. Moist and not chewy. 6.5/10.
(Al's review: Juicy and tender; tasting some spiciness. Casing is soft ; not crisp. 7/10)

Turkey: Very moist. A light smoky flavor, and not too salty. This is easily the best item we try. 8/10.
(Al's review: Pretty much the same. I did find it was better with some of their sauce added. If you are BBQ purist (no sauces allowed to enhance flavor), probably a 7/10. Otherwise, same as Tom: 8/10)


Beef rib: Also tastes like it is a wet rub with the sauce. It is very tough, and not a lot of meat compared to other places. I may have been spoiled elsewhere, but this is a disappointment. 4.5/10.
(Al's review: Strong flavor in the bark; good smoke for me. The meat is tough on this one; there's an oily finish that softens it as you chew.  5.5/10)

Brisket: This is the one that surprised me the most. As I’ve mentioned before, I’ve gotten meals here before and normally the brisket was decent. This … isn’t. Even the bark isn’t that flavorful, and there’s not really any flavor anywhere else. I’m almost immediately reminded of my Mann’s experience, where it is meat and…   There’s no smoke here. 4/10
(Al's review: Yea - not very impressive. Weak flavor and a little too fatty for a brisket. 4/10)

I understand that we were there late, but I work under a simple philosophy: If you serve it, be prepared to be rated on it. One thing nearly every top quality BBQ place I can think of has in common is this: They start serving at time X, and serve until they run out. Salt Lick appears to be cooking throughout the day and it shows in some of their later offerings.


Is it worth a visit? It’s probably worth a stop if you’re in the area for some reason anyway. As I mentioned before, it’s normally a good place for a pre/post game meal. And it is certainly a good call if you have a tremendous appetite and want the AYCE.

Is it worth a trip? Nope. There are plenty of other places that are worth spending the time on. The Round Rock Salt lick isn’t worth spending 2 hours of your time (plus dining time) going to visit. Try some of the others instead.
at 12:30 AM

Email ThisBlogThis!Share to TwitterShare to FacebookShare to Pinterest
Location: Round Rock, TX, USA