Let’s get this clear up front: I’m a purist. Some might even say snob (although Daniel Vaughn claims the official handle). BBQ should stand by itself. If you use sauce or other toppings on your meat, aren’t you just copping out?  I’m the one most likely to give the harshest review of a place. The one least likely to be satisfied if the meat can’t stand alone. My rock that I stand on: The meat and nothing but the meat! No one is going to convince me that I’m wrong!


Valentina’s has just knocked me off that rock. And they pulled no punches.

Mom, Dad, my Uncle Mike (not the Mike mentioned in other reviews) and I went there for lunch. At first glance this place doesn’t look like much. It’s a small trailer in the parking lot of a convenience store. There’s a relatively small smoker around back. 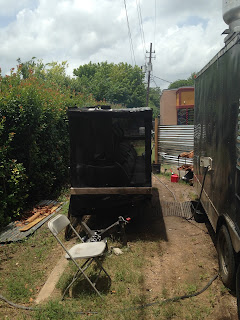 You can get meat by the pound, but unlike most places this is not their niche. They specialize in sandwiches and… tacos? Yep, looking at the menu again there are 4 regular sandwiches and 4 regular tacos. There are also two special sandwiches and breakfast tacos (which we are too late for). BBQ tacos… this should be interesting. 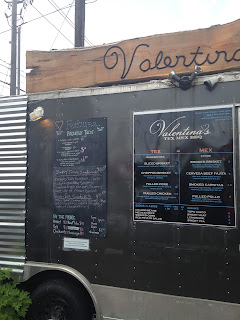 Dad orders the Sloppy Jose sandwich (of which I’ll steal a piece of the jalapeno-cheddar sausage). Mike orders the Porky Pig Sandwich. Mom gets the Smoked Brisket taco and a beef rib (both of which I try). I get the Smoked Carnitas taco and a ¼ pound of the pulled chicken. We’ll start at the bottom and work our way up. 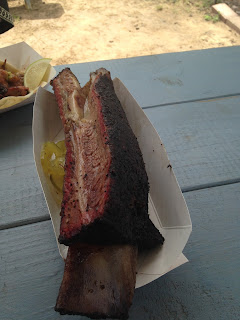 Beef rib: The beef rib is juicy and tender with good marbling. There’s a nice bark on the outside. It’s lacking just a bit in the smoke flavor. I can taste some, but not quite as much as I want. It’s  good but not exceptional. 7.0/10. 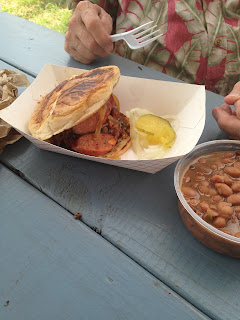 Jalapeno-Cheddar sausage: There’s a good snap in the casing. It’s juicy and not overly chewy. *6.5/10.
Wait.. I thought you said you were starting at the bottom and working your way up. What gives?!?
The truth is I just don’t like jalapeno. It’s not about heat, as there are plenty of hot things I do like, but I’ve never liked the taste of jalapenos. Given how much I dislike them, the fact that I give this 6.5 out of 10 means anyone who DOES like jalapeno would probably give it 8 or 8.5. We’ve always said that taste is relative. This is a prime example, and when I know that my personal taste is affecting the score I’ll try and point that out. 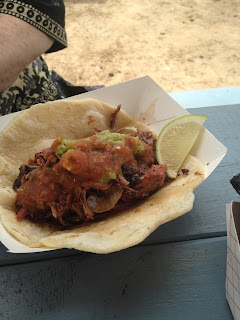 Smoked Brisket Taco: The smokiness of the brisket is apparent, and is complimented nicely by the salsa and the guacamole. I wouldn’t think those flavors would blend, but they do quite nicely. 8.5/10. 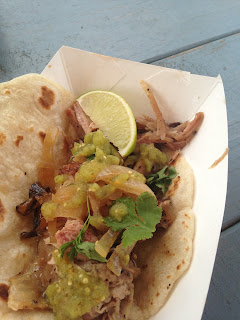 Smoked Carnitas Taco: Again, the smoke flavor comes through clearly, but without being overpowering. The onion, cilantro, and salsa seem like they would blend nicely, and they do. It’s an excellent merging of smoke and a hint of heat from the salsa. 9.0/10. 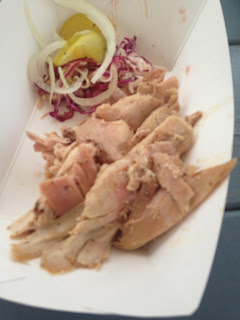 Pulled Chicken: Juicy, tender, and a lovely smoked flavor. Their pulled chicken was done to perfection. I’ve always said that poultry is a hard one to do well, but they’ve pulled it off. 10/10.


So there you have it. A BBQ purist went to Valentina’s with his preconceptions… and had them shoved back in his face hard. There’s something to be said for combining smoky goodness with the right combination of flavors. In fact, I find it interesting that the two items I scored the lowest (and they are still respectable scores) were “purist” items.


Don’t get me wrong. I still maintain that a good beef rib, brisket or pork chop is a thing of beauty. But Valentina’s has shown me that beauty comes in a variety of flavors.


Is it worth a visit? Absolutely. In fact, I’m glad I don’t live too close I could see myself eating there all too often. Mom and I both agreed that in terms of taste the tacos were better than Torchy’s (although Torchy’s has the edge in variety).


Is it worth a trip? So the conversation goes like this:
You: “So let me get this straight. You want me to drive an hour (or more), to S Brodie in Austin. Once there I’m not even looking for a building, but a gas station. Once at that gas station (again, having driven an hour plus), I’m going to a trailer (so it isn’t even in the gas station) in the parking lot of that gas station to order BBQ. I’m not going anywhere else. And you think this is worth doing?!?”


Me: “Yes”.
Disclosure: As we were leaving I complimented one of the staff on the food and mentioned that I did reviews and would be giving them an excellent one, as I was very impressed. He gave me a free t-shirt. My scores had already been entered on my phone and this did not impact them. 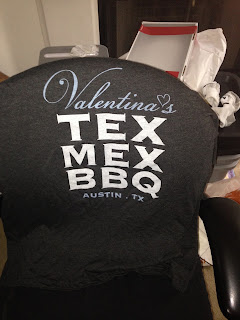