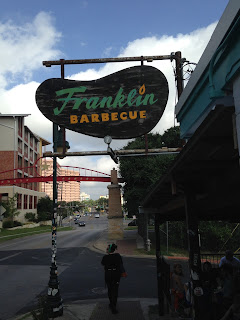 Let’s face it. Franklins is considered the big bull in the BBQ scene in the Austin area. It’s certainly the most popular, with lines forming before 8:00 for an 11:00 opening, professional place holders, and rumors that someone makes a sizable amount of money each week renting chairs. But is it really that good? I managed to get a pickup order or today to share with friends.


I arrived about 9:20am (pickup time is 10:00) because I planned to talk to some of the crowd. One thing I eventually noticed: the line is not quite as bad as it might seem. While it stretches around the parking lot, there’s a lot of space between groups of people, and chairs take up more space than people standing in straight file line.


Lisa and Max Ortiz were the first to arrive in line this morning at 6:50am. It’s their 2nd time coming to Franklins and they love it.
57 people back are Greg and his friends. They arrived at 8am. So 57 people showed between 6:50 – 8… not bad…   It’s the first time for Greg and company.
Go back another 75 people and you meet Jensen, Barbara, John (not shown), and Tom. They arrived at 9:00am. Incidentally, Tom is from Chicago and came primarily for the BBQ. We briefly discuss a few other places he might also want to check out. 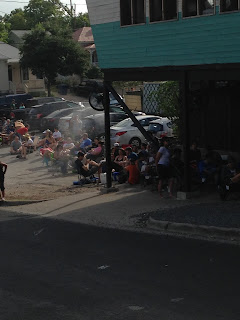 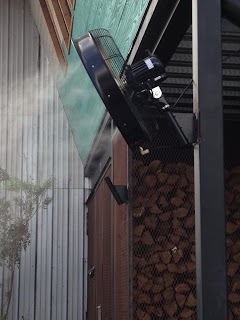 There’s only about 15-20 people in line after this group, so total line at this point is @150. Greg and friends probably have the best spot: some shade and they are right under one of the misting fans. These are very nice. 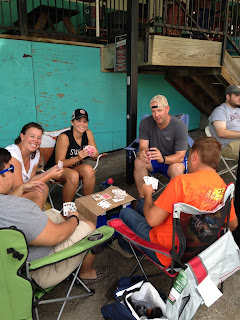 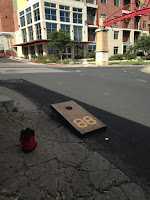 ﻿People certainly come prepared to this event. I see people playing cards, and someone is setting up what appears to be the boards for a game of washers. There’s lots of back and forth, with people from different groups talking and mingling. One thing this line certainly does is bring people together. 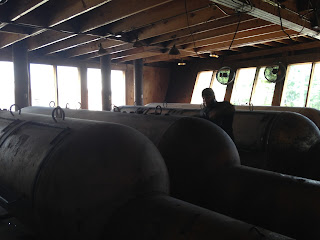 The general manager Benji Jacobs is there. He mentions that this line is actually a little short for a Saturday, and suspects that after a big BBQ weekend like July 4th people are taking it easy. He also allows me to come back and take some pictures of the pits. It is an impressive site. Franklins also uses smoke, salt and pepper only, and it smells wonderful back here (although how they survive the heat…).


After a few more conversations 10:00 rolls round and I go inside to get our To Go order: 3 pounds brisket, 3 pounds ribs, and 2 pounds each pulled pork, turkey, and sausage. They bag it up along with some beans, bread, sauce, etc. and I head to my friends’ home. 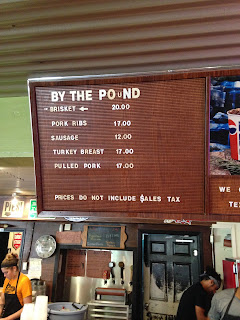 Tasting today will be done by myself, Scott, AJ, and our friends Bill and Kelly (who have also graciously provided their house). Bill does not like white meat, so he only tries the brisket and sausage. (Technically he tried the pork and turkey but it confirmed his opinion that he just doesn’t like white meat).  Kelly just doesn’t eat much, so she only tries the ribs and brisket. 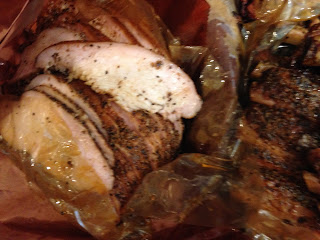 Turkey: Turkey is moist and has an excellent pepper flavor. It is just a smidge tough in places, but the flavor makes up for it in my and Scott’s opinion. AJ is not quite as big a fan. Final scores out of 10: AJ – 6, Tom – 8, Scott – 9. 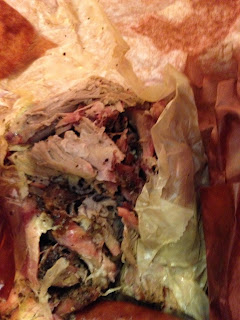 Pulled Pork: The pulled pork also has a nice smoke flavor, and is tender. While I’m not normally a sauce fan, this one I recommend with their expresso sauce. All of us agree it is good. Final scores out of 10: AJ – 8, Scott – 9, Tom – 9. 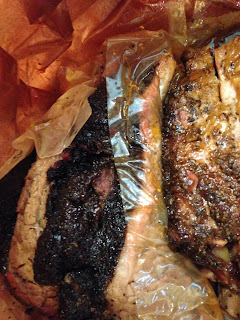 Brisket: I find the brisket moist and tender, with a nice bark, excellent smoke flavor, and just the right consistency. Scott agrees, and both Bill and Kelly (who are nowhere near as dedicated as Scott and myself) both feel it is very good. Surprisingly AJ feels it is not moist enough. When asked what he considers moist enough, he references Rudy’s, with the grease running off the brisket. I think we’re going to have to disagree with him. But he’s from New Jersey, so we’ll forgive him…  Final scores out of 10: AJ – 6 (really?), Bill – 8, Kelly – 8, Scott – 10, Tom – 10. 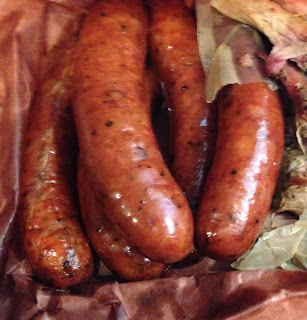 Sausage: There’s a good snap to the sausage, it’s got a nice pepper bite, and is tender and juicy. It’s got a good smoke flavor. Final score: Bill and Scott and AJ and Tom all give it a 9. 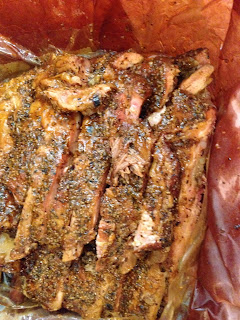 Ribs: The ribs have a nice smoke flavor and good crust. I think this is the one item where there’s something more than salt and black pepper, as there are some sweet notes as well (maybe paprika?). Either way, it is a wonderful taste in my opinion. General agreement from those who try although Kelly thinks there’s a little too much going on with the rub and she can’t taste the meat the way she wants. Final scores: Kelly – 7, AJ – 9, Scott – 10, Tom – 10.
If you’ve wondered if Franklins can live up to its reputation, it does. It is certainly some of the best BBQ in the area. They clearly know what they are doing.
Is it worth a visit? Absolutely!* Everyone needs to try this place at least once.


Is it worth a trip? Again, absolutely!* Franklins may have become a cultural icon in Austin, but the quality of the BBQ means every purist should try them at least once.
(Al's comment: OK Tom, I saw your asterisk up there. I know that means you have a comment. Let’s hear it.)
You know me too well. When I rate a place as worth a visit or worth a trip, I’m talking about the quality of the food. But occasionally there may be other factors at work in a place that deserve mention so you can be fully informed. For Franklins, it’s the wait. One person at the front counter (speaking off the record) told me that a line like the one they had today takes about 2 hours to work though. And of course more people are coming during the day. And on a Saturday like today they usually run out about 3:00.
In short, when you add in the time factor EVERY visit to Franklins will probably qualify as a trip in terms of time. It’s a safe bet you can plan on a 90 minute to 2 hour wait if you get there at opening. And despite that it’s still worth doing at least once. Look at it as a social event as much as a food trip. You’re going to go out, mingle with a lot of people you haven’t met before, and whom the only thing you may have in common is the need to breath a nitrogen/oxygen mix and the desire for some good BBQ. And at the end you are going to have some excellent BBQ.
-Tom