Now for something completely different: Florida BBQ?! Some background. As a transplanted Texan living in south Florida, I'm a bit further from the land of smoky briskets and honeyed ribs than is feasible to scratch the true BBQ itch. One of the perks of traveling to Texas (besides the company of friends) is a chance to dive into different BBQ spots. It's like being that thirsty guy in the desert who finds an oasis.


So imagine my surprise when someone (a transplanted Texan himself) decided to open a Texas-style BBQ place in town. I had to check it out sooner or later; and this blog seemed like a good reason to do so. Today I had time to stop for lunch on the way from work, and finally see what it was all about. 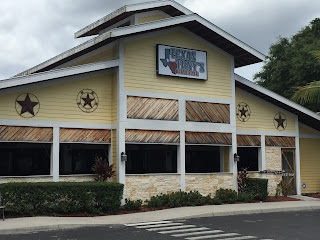 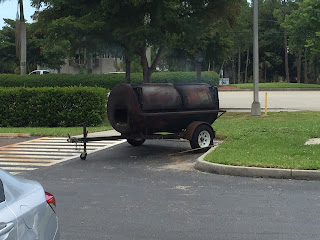 Texas Tony is more your traditional restaurant style place - you grab a table and put in your order. None of the more Austin-style trailer spots or maybe your cafeteria walk-up style and order from the counter that I'm used to seeing. Still, it's not all invisible cooking, as you can spot their main smoker in the parking lot and it smells good. Besides priding themselves on a special rub, the other major difference is that they use the wood from orange trees to create their smoke. This orangewood creates a milder smoke flavor (more on that in a minute) according to them. The place itself is Texas kitschy - probably interesting if you are from outside the region (and we get a lot of folks from the Northeast or internationally around here); indeed it's probably what some folks would expect from a place with Texas in the name. 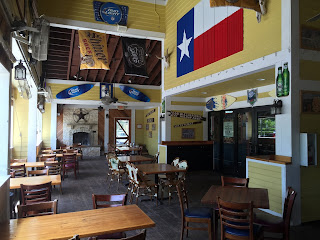 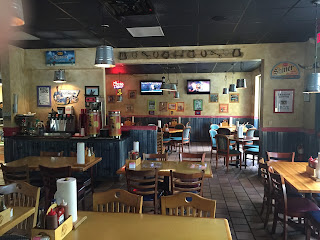 You can order food by the pound and as individual meals, but I go for the trifecta in a sampler version: Brisket, Pork Ribs, and Sausage. You can also go for the Chopped Pork, Chicken, and Tenderloin, so I'll have to make a second trip at some point to check it out. 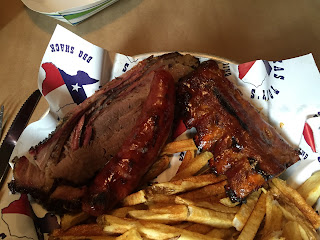 Jalapeno-Cheddar sausage: They don't have your traditional sausage, but jalapeno-cheddar style. I am more of traditionalist, but it looks good. There's a good snap in the casing. It’s juicy, but a little chewy on first bite that melts well. The trouble comes in that any natural flavor is overwhelmed by the cheese and the jalapeno kick is nonexistent. It starts great, but ends 'meh.' 5.0/10.


Pork Rib: The baby-back ribs  are clearly not in the classic "big-rib" style you might expect, so initially I am skeptical. But they are tender - breaking apart and very juicy. A surprising amount of meat for their size also helps. And here's where that orangewood makes an appearance. The rub is very light, but a mild smokiness rolls in as an aftertaste of flavor that stays on the tongue. It made me want to get more ribs; and usually they are my least favorite of the big three. 7.5/10.


Brisket: The brisket is probably the most traditional in style, although I found the bark was minimal and any flavor of the rub to be absent. But it is moist and tender with the right amount fatty to melt it. Here again, a mild but consistent smoke flavor comes through clearly on the end; but initially its bland.  Of all the foods, the brisket is most helped by Tony's two sauces - as they mix well with the smoke. They offer a more traditional one of sweet and a more vinegary habanero style. I sampled the brisket with both, finding the sweet went well while the spiciness of the habanero took away from the more natural flavors.  If you are more of a purist, I would lean towards: 6.0/10; adding the sauces lifts it up: 7.5/10.


Is it worth a visit? Absolutely. Even if you aren't a BBQ fan, the food is good and ribs are certainly appealing. Plus, it's a unique taste in the area that you should check out.


Is it worth a trip? This is harder to say. I certainly had a good enough experience that I would make another jaunt there. But outside of checking out the ribs and the unique approach they take to their smoking, a Texas BBQ fan might not find it worthwhile.
So while it doesn't quite live up to what I  would find in some Texas BBQ joints, it does satisfy enough to keep me interested. What this trip has also done has made me aware (after some digging) of other unique BBQ joints in the region that I want to check out. So hopefully there will be more to come.
-Al