BBQ Festivals come in all shapes in sizes. At one end you have Texas Monthly’s BBQ festival, which will have 27 participating BBQ joints this year and will have thousands of visitors (with correspondingly long lines). On the other side you have Gettin’ Sauced .


A smaller and much more laid-back affair, Gettin’ Sauced held their 6th annual festival (and their 5th was held in 2014) this weekend. A grand total of 12 vendors were there, and two of them were sauce only.


Yes, Gettin’ Sauced is a BBQ sauce festival as much as a BBQ festival, with a sauce judging contest. So we will actually be discussing sauce in this posting.


You wonder: For a cost of $40 is it worth going to? Well, not only do you get to sample (mostly unlimited) BBQ from some of the better places around, but there was also live music AND free beer. Several breweries including Independence, Middleton, Infamous, and St. Arnold were there, and if you bought a BBQ pass the beer was free. There was free Topo Chico mineral water as well. In short, you actually got a lot of extras for your $40.


You can see the list of BBQ places on the website above. It should be made clear that there was nothing bad there. Everything ranged from at least good to excellent.


Six of us went to the festival: Myself (Tom), Tish, Scott, Sherrie (whom you may remember from TMBBQ Fest last year), Stephen, and James. What we’ve decided to do is ask each of us what three food items and sauces stood out the most from the festival. (Not everyone replied). 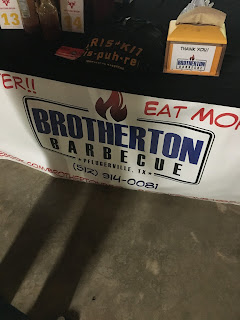 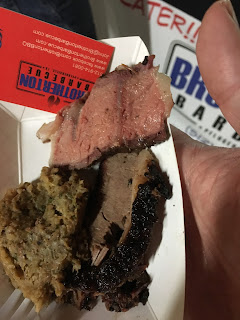 Tom: For Food, the three items that stood out the most would have to be BBQ Brotherton’s Blackened Shrimp boudin (which was awesome), the pork rib from Milt’s (which had a delightful bit of heat), and the boudin from Tin Roof (which was also excellent)! For sauces it would have to be Mikey V’s Cherry BBQ Sauce (at the BBQ Brotherton table) which has an awesome flavor but would seem to go best with pork, chicken, or seafood;  Louie Mueller’s Mustard -based sauce; and Slab BBQ’s Mustard based sauce. 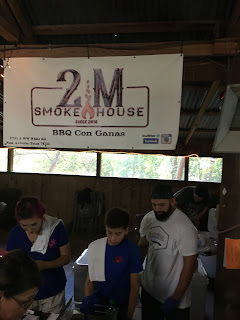 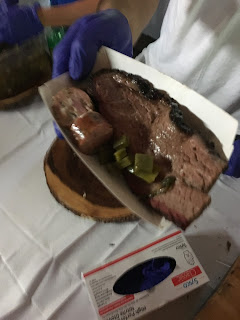 Tish: For food it was the pork rib and the boudin from Tin Roof BBQ, and the serrano cheese sausage from 2M Smokehouse. For sauce it was Louie Mueller’s Jalapeno sauce, the Mikey V’s Rasberry Reaper, and Tin Roof’s original sauce. 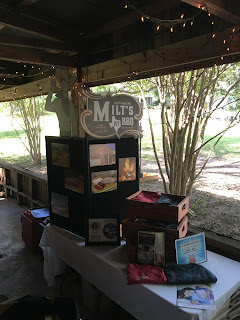 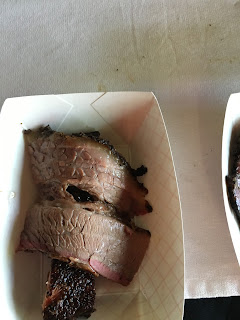 Stephen: Brotherton's had the best overall. This includes meat and sauce. Their raspberry sauce was amazing. Only thing is that if I had a BBQ at home I would still need some other sauce. As good as the raspberry sauce was I don't think I could have eat it with a whole meal.
Louis Miller had a great mustard sauce. I'm not a huge pulled pork fan. I don't hate it I'm just ambivalent. But that mustard BBQ sauce was the perfect compliment.
I wasn't particularly impressed with any of the brisket. Maybe I'm spoiled with having Valentina's right down the road but they all could have been rendered a bit more. That said the very first booth (Tin Roof) had some great ribs. But their sauce wasn't good.  It was way too “tomatoie”. I like my BBQ sauce thin. I also like my spaghetti sauce thin and I couldn't tell which of the two this was supposed to be. 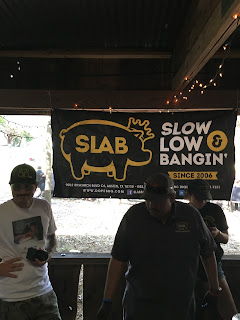 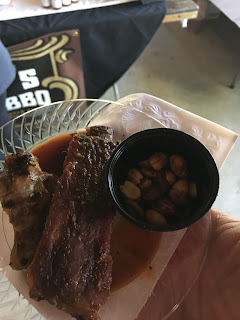 Sherrie: (Sherrie only commented on one of each). For sauce it was Slab BBQ’s mustard sauce (hot and tangy without being sweet). . For food it was Louie Mueller’s pulled pork (moist and tangy). 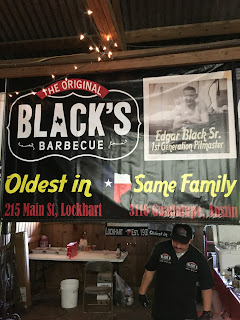 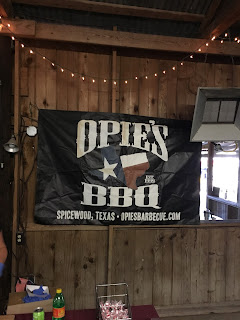 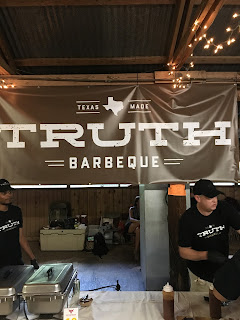 I will say that a low key festival like this is really nice. TMBBQ offers more selection, but there’s a lot more to enjoy in a quiet atmosphere like this. We all had a good time and it is definitely something we hope to go to again.