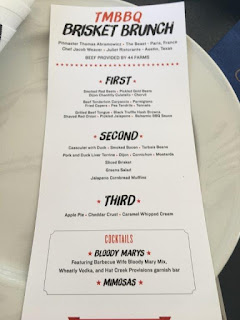 On October 29th, 2016, Texas Monthly BBQ held their first annual BBQ Brisket brunch. And they started off with a bang, hosting a collaborative event with Pitmaster Thomas Abramowicz from The Beast Paris Smokehouse (Paris, France) and Chef Jacob Weaver from Juliet Ristorante (Austin, TX). A shout-out also goes to Aaron Franklin, who loaned out a pair of pits so they would have smokers available. 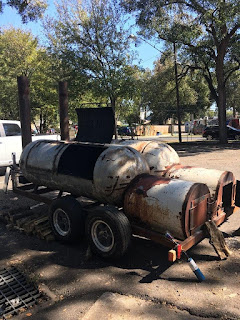 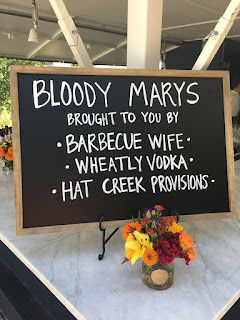 Free mimosas and Bloody Maries (with the latter courtesy of Barbeque Wife) were served at the beginning. After a brief speech by Daniel Vaughn (Texas Monthy's BBQ Guru), they began serving. 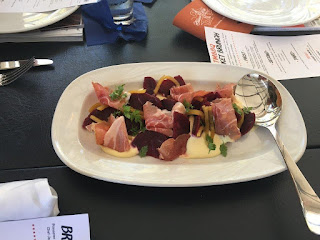 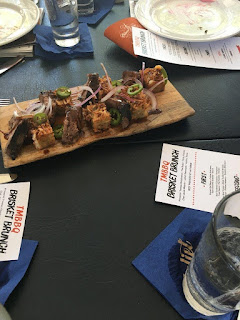 First course consisted three dishes: Smoked red beets with pickled gold beets, Dijon Chantilly Culatello, and chervil; Beef Tenderloin Carpaccio with Parmigiano, fried capers, pea tendrils, and Tonnato; and Grilled Beef tongue with Black truffle hash browns, shaved red onion, pickled jalapeno, and Balsamic BBQ sauce.
The beets had a wonderful smoky flavor. They had some moisture but were not overly juicy. Smoking seemed to make them a little less sweet than normal (which is a plus in my book). I normally don't like beets, but I liked these.
The Carpaccio was extremely tender and had a wonderful flavor. Fried capers were an interesting touch.
The grilled beef tongue also tasted wonderful, and was easily cut with a fork. The balsamic BBQ sauce made a nice contrast. I did not try the hash browns (allergy issue). 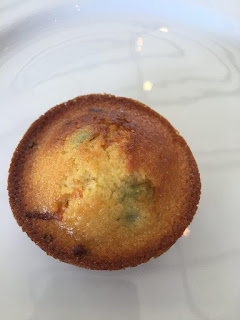 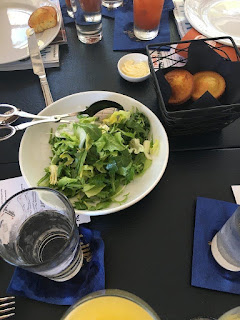 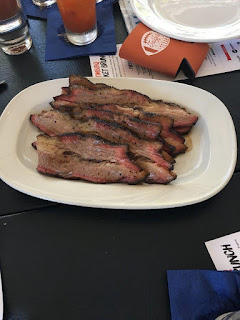 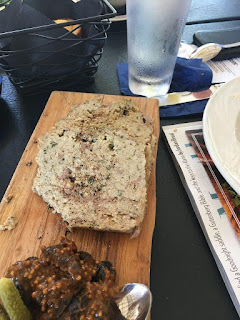 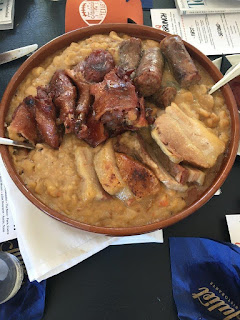 Second course consisted of: Jalapeno cornbread muffins; a greens salad; sliced brisket; pork and duck liver terrine, Dijon, Cornichon, and Mostarda; and a Cassoulet with Duck, Tarbais beans and other wonderful things.
The jalapeno cornbread muffins and the salad were both good for what they are. The salad had a dressing that had an interesting bitterness to it. I liked it, but noticed that not much got eaten by the rest of the table.
The brisket had an excellent smoky flavor, as well as some nice pepper. Having said that, it was definitely on the tough side, as it had to be cut with a knife. This was commented on by others at the table. If I was scoring it on a Recon scale, 6.5/10. Flavor is excellent, but for a Texas style BBQ it needs to be a lot more tender.
I've never had pork or duck liver before, and to be honest I expected to not like this one. But this tasted really good. It looked almost like slices of bread, and had a nice slightly sweet flavor. You could taste both meats in there, and this was my favorite dish so far….
Until the Cassoulet. Oh my goodness. The Pitmaster and his team would come out later and talk about this dish. It was prepared in the smokers, and had homemade sausage, smoked duck, what appeared to be pork belly, and some wonderful beans and onions. Honestly, if I had gone home having had just this dish, it would have been a worthwhile event.
Third Course: Apple pie with a cheddar crust and caramel whipped cream. The apple pie part itself was very good, as was the whipped cream. I've never had a cheese crust in pie, and this just didn’t appeal to me. I know apples and cheese are a popular combination with some, but I'm not a fan of that flavor combination and it also made the crust a lot tougher.
This was an excellent first brunch. The food was outstanding and the combination of styles made for some interesting dishes. Hats off to Thomas, Jacob, and their staff, and a big Thanks to Texas Monthly for setting this up. See you there next year!
-Tom
at 5:00 PM