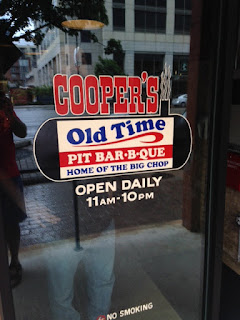 Scott and I decided to check out the Cooper’s BBQ that opened in downtown Austin. And we do mean downtown. It’s at 217 Congress, just a few blocks away from the convention center. It does have outdoor seating. 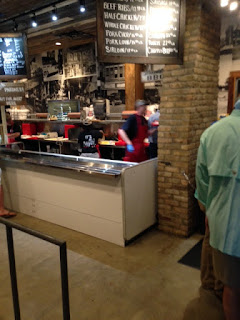 The atmosphere is interesting (the pictures on their site do much better justice than any I could take). While they’ve gone for a rustic feel inside, it still has a downtown Austin vibe to it. It’s definitely not the same feel as the Llano location. Of course, they also have a bar, which is pretty much a must for any place in this area. 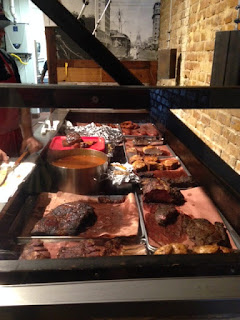 They do follow the same open pit style as the other locations: point at what you want, get it, and pay. I get original sausage, pork rib, moist brisket, turkey, prime rib, and pork loin. (I also end up getting chicken, sirloin and a pork chop at home later). Scott gets brisket, turkey, pork loin, and both jalapeno-cheddar sausage and jalapeno sausage. 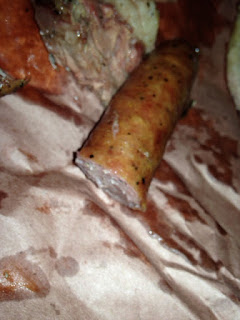 Original Sausage: The sausage has a good snap, and is tender and juicy. There’s a touch of heat at the end. There’s also a nice snap in the casing. It appears to be the same recipe they use at the other locations. Quality wise I’d give it an 8. Cooper’s sausage has a flavor to it that I’m not a personal fan of. That’s always a potential issue with sausage: it’s one of the places you can run into the greatest variations in flavor. Anyway. I’ll actually give it a split score: 8.0/10 for quality, but 6.0/10 overall.
Cooper's Jalapeno Cheddar Sausage: It's well packed in the casing.  Loose meat in a sausage casing is just something that doesn't taste right to me, so I always dread it when I come across it.   Fear not in this case. Nice snap to it. Cheese flavor throughout. A wonderful jalapeno flavor expansion that starts about 8-10 seconds later. It's a great kick of heat. If this is something you appreciate it, dig in.  Scott gives it 8.0 out of 10.

Coopers Jalapeño Sausage: No comments from him, but Scott gives it 8.0/10. 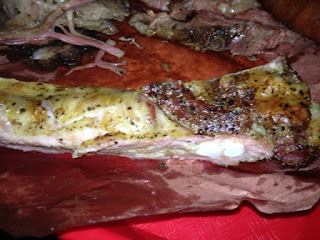 Pork Rib: The rib has an excellent flavor that goes through to the bone. I love the rub. There’s a light smoke flavor and a light crust. It is tender in some places and someone tough in others. This may be partially due to the fact that it is a huge rib. I’ll call it 7.5/10. 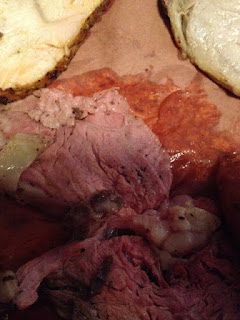 Prime Rib: The prime rib is tender, juicy, and has an excellent flavor. Also, they are doing it right, as it is actually pink verging on red in the middle! If I have a complaint about it, it’s that the smoke in what I get is so light that I have a hard time telling it’s been smoked. Call it 8.0/10 because the flavor is excellent. 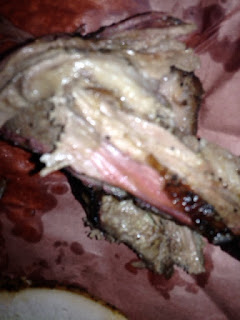 Brisket: The moist brisket is tender, moist, and has an excellent bark. The smoke flavor is a touch on the light side, but the other parts of the rub are excellent. The fat has rendered well. Both Scott and I give it 8.5/10.


Incidentally, Scott also ordered a piece of lean brisket. However, he ended up with a lean burnt end. It was excellent, but we felt we couldn’t rate it in good conscience, since burnt ends damn well better be good. (If your burnt ends are bad you’re in big trouble!).


Scott's comment: Lean brisket - flavorful and has enough moisture to it.  Yeah, I hit the burnt end jackpot. It made up for Tom trying to kill me early in the day with his questionable driving decisions.


Smoked sirloin: The sirloin has a light smoke flavor, just a touch of pink, and a good flavor. Tish commented on the light smokiness as well. It is tender and juicy, even reheated. We both give it 8.0/10. 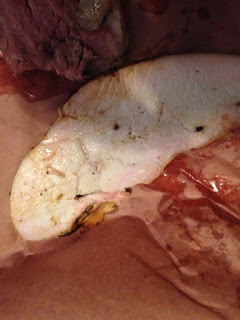 Turkey: The turkey is tender and juicy. It is not too salty, has an excellent rub, and that same light smoky flavor. Scott and I give it 8.5/10. 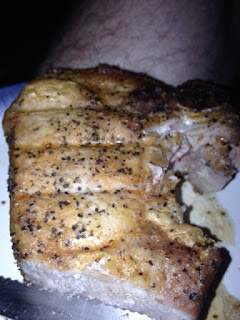 Chicken: The chicken is tender, juicy, and has a nice skin. The rub is good and there’s that nice light smoke flavor again. The flavor has penetrated all the way through. I’ll give it 8.5/10. 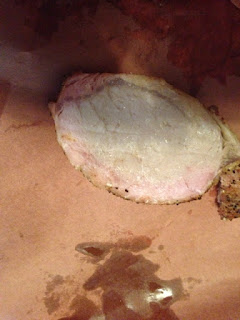 Pork Loin: Tender, juicy, and a nice crust. We both love the rub, and the light smoke compliments it nicely. We both give it 9.5/10.


Pork Chop: Even reheated it is tender and juicy. It has the same good flavor as the pork loin but you get some of that bone flavor as well. I give it 9.5/10.


So what’s the verdict? Well, for my end you’ll notice that I commented a lot on the lightness of the smoke. To me, the smoke flavor in BBQ is key. I like a lighter smoke flavor in my white meats, and a heavier smoke flavor in my red meats. I did notice that the smoke flavor was uniformly pretty light. It worked best on the white meats and meant that the red meats where just a hair lacking (although still very good). I chatted briefly with one of the managers who was there, and we both agreed that a large part of it is that these pits simply aren’t seasoned the way the Llano pits are. They’ve been in use for 47 years, while this location is barely pushing 4+7 weeks.


Is it worth a visit? Absolutely. The BBQ is excellent, and it’s in a great part of town if you are doing other things.
Is it worth a trip? With nine scores of 8.0 or higher, definitely!


We don’t normally comment on other things besides the BBQ, but will if warranted and this Cooper’s warrants it. In choosing this location, they’ve done something very bold for a sit-down BBQ joint of this type. They’ve set up camp in arguably the busiest area in Austin, and certainly the one with the worst parking situation. You do need to be aware that free parking is pretty much non-existent in that area (unless you have an arrangement worked out with a state employee), so if you’re choosing this Cooper’s just for a BBQ run, plan on adding $5 or more to your tab for the day for parking. You could also end up several blocks away. It’s worth it, but you don’t want to be caught off guard.
Scott's comment: Mass Transit, depending on where you're travelling in from. And since this is Austin, always a good idea to check what sort of events, festivals, 10k runs, or other sorts of things are going on in the name of Keeping Austin Weird.