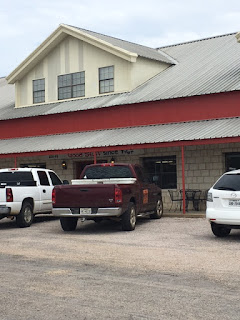 Working at a contact center like Mike, myself and (until recently) James, you can hear about a lot of different places throughout the state. But someone suggested Inman’s Kitchen to Mike, and added “It’s better than Cooper’s”. Now Mike is a HUGE Cooper’s fan, and I’ve enjoyed my trips out there enough to know that this is a pretty big claim. So Mike, James, Hank (Mike’s brother-in-law) and I drove that way to see how it measured up. 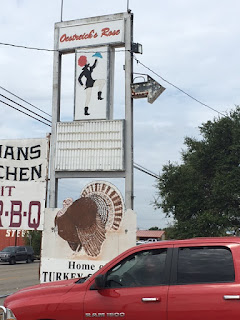 Inman’s is located on HWY 29 in Llano literally about 300 yards past Cooper’s (and there’s another BBQ joint between them). They have a good selection on their menu, but are apparently known for their turkey sausage. I’m looking forward to trying this, since I’ve only tried one previously and I’m not sure what the norms are on texture and snap. But I’ll be trying their turkey sausage, ham, pork ribs, pork tenderloin, turkey, and brisket. The others aren’t as adventurous (or hungry) as I am so they try roughly two things each. I also brought back pork tenderloin, brisket, and jalapeno/cheddar turkey sausage for Scott, and some pork tenderloin for Tish. (So note that Scott’s and Tish’s scores are going to be based on reheats). 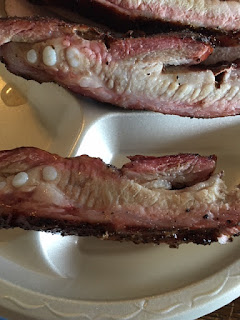 Pork Ribs: The pork ribs have an excellent flavor, with some very nice spice and a nice smoky taste. However, they are somewhat tough and chewy. Grant came out and spoke with us, and did say that he had realized their best work. So, flavor is excellent but definitely not the best preparation. Score: Tom 6.5/10. 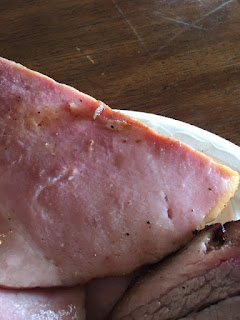 Ham: The ham is tender, and has a light smoky flavor. There’s a hint of pepper and some salt. It’s not overly fatty, which is something I’ve noticed at other places at times. Score: Tom 8.0/10. 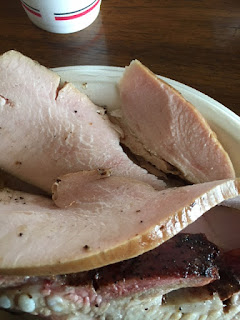 Turkey: The turkey is extremely tender and moist. It has a light spicy taste, and a heavier smoke flavor than I find in a lot of other turkeys. It’s really good. Score; Tom 8.5/10. 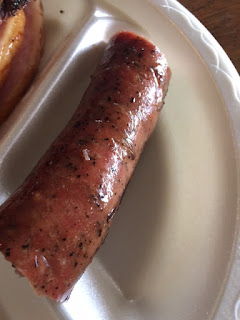 Turkey Sausage: The sausage has an excellent flavor, with spice and pepper dominating (and some garlic). Unlike my previous adventure at Killen’s, this is definitely a lot more tightly packed and firm. Maybe too firm, as the casing is very tough and a bit difficult to bite through. But the flavor is excellent. Hank tried it as well. He wasn’t as excited about it, but admitted that he had tried a sample of the Jalapeno cheddar, which was much better so he was comparing it to that. Scores: Tom 8.5/10, Hank 6.0/10. Avg: 7.25. 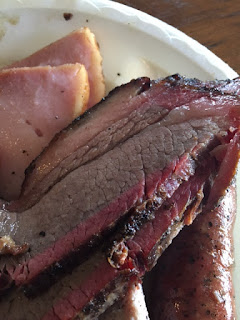 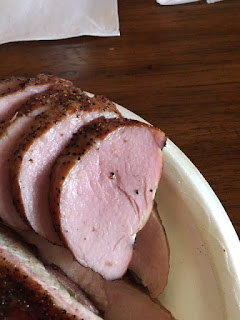 
I have to admit I was skeptical of the “Better than Cooper’s” claim. This was a place I hadn’t heard anything about until Mike learned of it. But it goes to show that you can find excellent BBQ everywhere, sometimes right next door to another excellent BBQ place. Is it better than Cooper’s? That’s a tough call. In truth, when you start dealing with scores of an 8 or higher, you’re dealing with individual preferences in taste. I can certainly see why someone might say this place is better, and I’m not sure I could argue the opposite strongly. They each have their strengths. The true winner is the city of Llano, which has at least two excellent choices for BBQ. 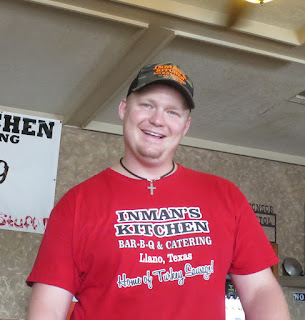 Is it worth a visit? Definitely


Is it worth a trip? Well, it’s 67 miles from my door to their parking lot, and I certainly think it was a day well spent, so yes.


Mike’s Comments: Cole slaw was dry which I prefer to over mayonnaise versions.  Inman's has homemade bread which is outstanding and several varieties of homemade pies. I took home a cherry pie. The crust was flaky and the pie delicious. Cooper's is still the best!