The McRib Review (McDonald's @ Georgetown WalMart, TX)
(AKA, What the Hell??!)


I was very pleasantly surprised with the McRib. There are rich subtle undertones of hickory and oak in the meat. The sauce adds the right amount of tang. The edible bones are a nice touch. It’s juicy and tender without being….(cue needle scratching record noise)


OK, the dogs are growling at me and my wife is checking to make sure the house is properly grounded in case of lightning strike.


The McRib is a reoccurring item on McDonald’s menu. It first came out in 1981, was removed from the menu in 1985, returned in 1989, and became a seasonal item in 2006. It maintains enough popularity to hold onto that status.


Calling the McRib BBQ is like calling reality TV real, or the current LA Lakers a basketball team. There’s only the faintest nod in that direction. A little explanation if I may:


Any rib meat in this sandwich is incidental. McRib (like McNuggets) is a restructured meat product. Less desirable pork products are processed in a way to form a shape (in this case, something vaguely similar to ribs). You can read more about the McRib at this website: (Chicago Magazine). There’s also no smoking in the process (obviously). It’s cooked on the same flat metal grill as all of McDonald’s other products. 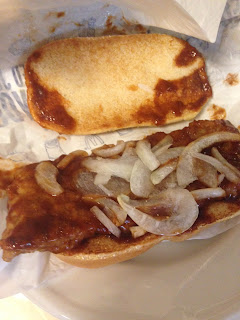 (Scott's comment: Looks like the High School Cafeteria's Salisbury Steak...with onions.)
(Tom's reply: The Salisbury steak actually had flavor. )
So how does it taste? Well, I ordered 2: one with everything but pickles, and one as plain as I could get it (it comes pre-sauced so light sauce is as plain as you can go).  I’m sure you’re expecting me to say horrible things about it. Actually, when it comes to the rib patty itself, it’s going to get the most damning comment of all: it’s completely unremarkable.


There’s no real flavor to the patty at all. Once I wiped the sauce off my plain one, I didn’t really taste anything other than hints of residual sauce. I came across no real gristle (points for that), but no real flavor. It literally was almost like eating nothing. I’d have almost rather had a flavor I didn’t like, as at least it would have been memorable. I think I got more flavor from the bun.


And that confirms what I suspect about McRib. As my wife says, it’s a vehicle for BBQ sauce. The sauce they use appears to be the same they use on McNuggets. While there’s a slight hint of smoke in the sauce, there’s also a strong metallic taste. It’s very heavy and cloying, and overly sweet.
In conclusion, the sandwich isn’t anything without the sauce. I personally don’t like the sauce, but since McDonalds has been using it for their nuggets for years, I suspect some people do. If you are at McDonalds and like their BBQ sauce, you can order this. All you’ll taste is the sauce and you’ll spend $3.50 on just the sandwich, but it’s your money. Although, why not order a hamburger and a side of BBQ sauce? You’d get more flavor.
Is it worth a visit? No.
Is it worth a trip? Do I really need to answer that?
-Tom

(Al's comment/postscript:  This particular review led to an interesting chain of conversation...)

(Tom: I threw myself on that grenade...it's not the worst thing I've had.)

(Scott: You paid money for this? On purpose? We really want to devote parts if the internet to this?)

(Tom: It's been around off and on for 25 years. Probably worth a mention.)

(Scott: I have t-shirts that old and I don't think they're worth a mention either.)

(Tom: The McRib is the Khardashian of the BBQ world. No redeeming value, but it manages to stay around. )

(Scott: You are officially the Super Dave Osborn of BBQ Blogs!)

(Al: *Between fits of laughter* This is soooo going in the blog!)