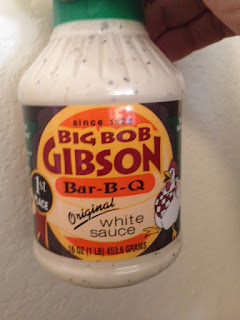 Back in July I went to Slab BBQ. Among the things I tried was their white BBQ sauce. My verdict at the time was that it tasted like salad dressing (Caesar, to be precise). It wasn’t a bad taste, and in fact I used what was left on a salad later that day. But it didn’t seem to be a taste that went well with meat.
My comments started a heated debate (OK, a few comments here and there) that Slab must have a very poor sauce, and wasn’t a “real” white BBQ sauce. A variety of suggestions came through, but one I noticed repeatedly was Big Bob Gibson White BBQ sauce.


Using the advantage of an Amazon Prime membership I ordered a bottle ($9.99), and then tried some with BBQ I picked up this weekend, as well as some chicken I had. I tried it on brisket, pork ribs, pork shoulder, and chicken. My verdict?


This is still salad dressing. Big Bob’s tastes a little more like a sharp ranch dressing with some extra vinegar, but it’s not anything I haven’t been putting on green leafy vegetables for years. My web perusal of the ingredient lists of other white BBQ sauce recipes seems to indicate the same thing. The flavor may range from Caesar to Ranch to Buttermilk, but the range all seems to be within the range of the white creamy salad dressings.


Again, let me stress: The flavors aren’t bad. But to me the two I’ve tried just don’t seem to go with smoky meat. I’ll try my Big Bob on some fish next, as that seems like it might be a more complimentary flavor.


We’ve always stressed on this blog that taste is subjective. It may also be regional. I understand that this is very popular in the S.E. part of the country (Alabama, Florida, Georgia, etc.). Maybe they use different rubs that make the flavors more complimentary. Maybe their tastes are just flat out different. Either way, they like it, I don’t, and that’s cool. It’d be a boring world if we all liked the same thing.