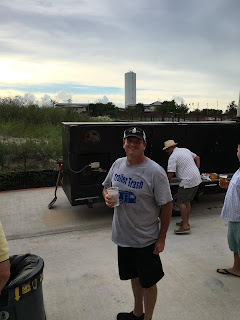 Those who follow BBQ may know John Brotherton from former locations Hall of Flame BBQ in Pflugerville or Curly’s in Round Rock. Some may also know that he currently runs Brotherton BBQ as a catering business. But he does do the occasional pop-up. On Wed, 7/27/16, he did one at The Growler Bar in Pflugerville? How’d it go? Well, apparently there were long lines and police controlling traffic: 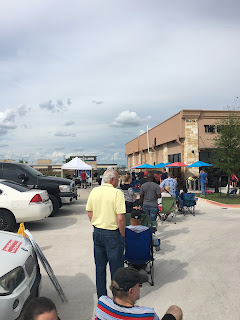 I missed that one (Wednesday and Tuesday aren’t the same day?), so when I heard he was doing another one on Friday 8/26, I figured I needed to swing by. I also thought I’d be smart and show up about 45 minutes before opening. Good call, as I was “only” about 100 people back in line. (Note to self: show up much earlier next time). 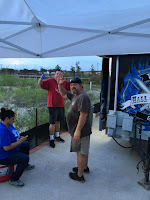 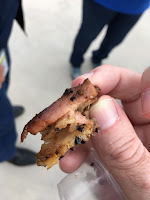 The line was a lot like the line at Franklin: very casual with a lot of socializing. The Growler staff was checking on people, and everyone was very willing to hold your place while you went and got a drink or hit the facilities. A lot of people have come out specifically to see John, and I personally recognized Bryan (@BBQ Bryan) as well as Robert from Fullhouse BBQ. They bring by samples of burnt beef belly, which are excellent! 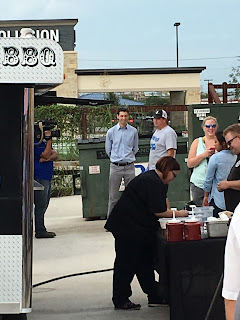 John is extremely friendly, and is spending a lot of time with the crowd chatting about pretty much everything and anything they want. KVUE news shows up and spends some time interviewing John as well as taking some establishing shots of the crowd. He does take a few people (including myself) back behind the trailer and we get some larger than normal samples of brisket while we’re waiting for our order. I end up with a lovely piece of burnt end that is just the right combination of crispy and tender, and I’m suddenly very glad I’ve already ordered or else my wallet might be in trouble. 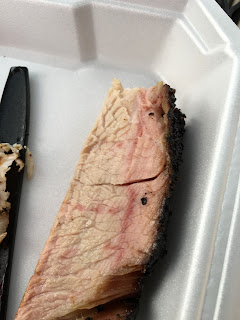 Pork Belly: The pork belly is nice and tender without being overcooked or greasy. It has a light smoky flavor, some nice pepper, and a hint of other spices. Don’t worry Charlotte, Wilbur died for a noble cause. I score it 8.5/10. 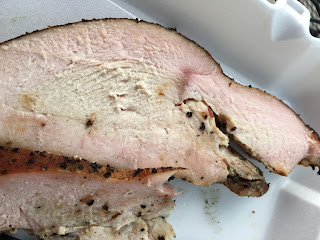 Turkey: The turkey is extremely tender and juicy. There’s a medium amount of smoke, and a strong black pepper flavor. I also had an end piece with some skin on it and it was nice and crispy. I’ll score it 9.0/10. 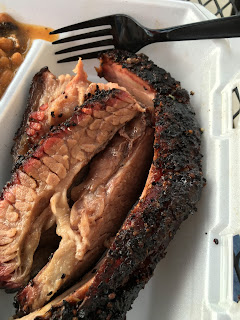 Brisket: The brisket has a very strong smoke flavor (a personal preference of mine) as well as a lot of black pepper. There’s also a touch of sweetness to it I can’t quite place, but accents the pepper nicely. It is a classic example of melt-in-your-mouth. I had a large burnt end in my order, and it showed that the one I got as a sample from John was no fluke. This is brisket done right. Call it 9.5/10. 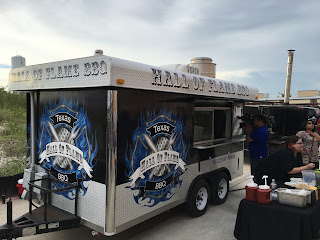 “How good can it be? It’s just a trailer,” was a comment I did overhear from one person while I was getting a drink and waiting for it to open. This did seem to be someone who was not waiting for the BBQ. It’s always interesting to see how people react to food trailers. Austin seems to enjoy them for the most part while Georgetown seems reluctant to embrace them. Based on the line I saw and the comments from the people around me in line (most of whom were from Pflugerville), there doesn’t seem to be too much problem with the food trailer in that area. 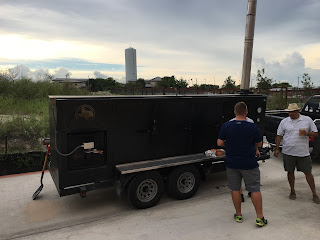 Pflugerville could use some good BBQ on a regular basis, and the BBQ from Brotherton BBQ certainly qualifies. John has indicated in other interviews that he does plan on opening a truck and eventually a brick and mortar place at some point. (A few of us did comment that there’s a nice empty lot next to The Growler  J  ).  But in the meantime we’ll have to be satisfied catching him at the occasional pop-up (unless you have a catering need).


Is it worth a visit? Is it worth a trip? I’m combining these two because with three scores of 8 or higher the answer is obviously “yes” to both. I do have to throw in the disclaimer that because of the nature of his business, you’re either going to have to catch him when he’s working a pop-up or else hire him for catering (I don’t think you’d regret it). Hopefully we’ll see him on a more regular basis sometime in the relatively near future.