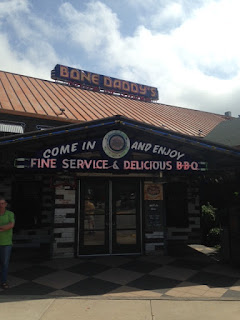 Scott, Mike and I decided to check out Bone Daddy’s today prior to us going our various ways for errands, bowling, etc. They are located on 183 just south of Duval. They have a fairly rustic interior with a full bar, and it is sit-down dining. There’s also another theme at work here, which I’ll address at the end. 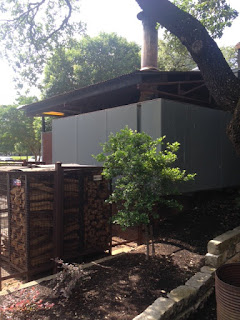 They have a very large selection, and they do have smokers onsite. We each decide to get plates, and between us order pork ribs, brisket, hot links, turkey, “backyard chicken”, pulled pork, and “brown sugar” ham. Not everyone tries every item.  They also bring a bottle of BBQ sauce to the table that has been “pre-warmed” (is actually hot). 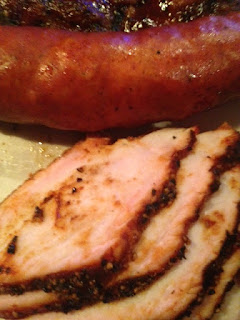 Turkey: The turkey actually has a decent smoky flavor, and there’s a nice spicy kick to it. It’s reasonably moist, if a tad tough. Scott and I both give it 7.0/10. 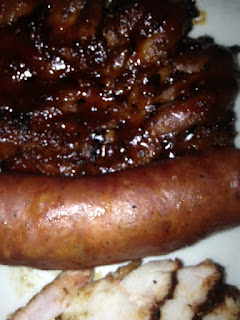 Hot Link: The hot link has a decent snap in the casing, and is reasonably moist. There is some nice heat. However, it is somewhat tough. I was the only one who tried it, and I give it 6.0/10. 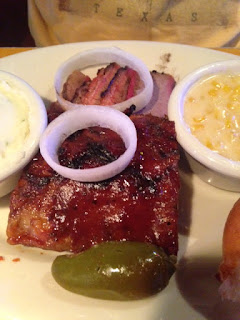 Pork Ribs: The ribs come out pre-sauced. They are reasonably tender (almost too tender), but there’s no real flavor other than the sauce (which is overpowering). So if you get a bite with sauce you taste nothing but sauce. Mike and I both give it 5.5/10. 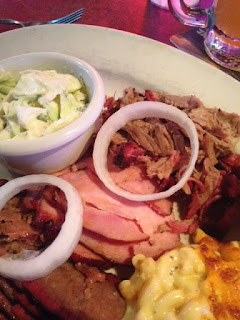 Brown Sugar Ham: The ham has a light smoky flavor and is reasonably tender. You can taste the brown sugar as well. It also is nice and moist. Scott gives it 8.0/10, while Mike and I give it 7.5/10. This is definitely the best item we had.
Pulled Pork: The pulled pork is not too greasy and not too dry. There’s a touch of smoke and a decent flavor. Scott gives it 7.0/10, I give it 6.0/10. 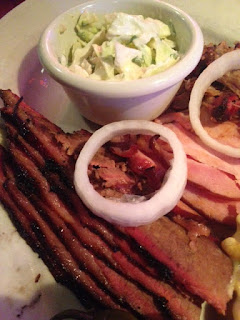 Brisket: The brisket is only OK on smoke flavor, and is not very tender or moist. Scott comments that it is like church potluck food that’s been out a while. There’s not much flavor in the piece I tried, and Mike isn’t that impressed either, but Scott apparently got one or two pieces with decent bark that had some decent flavor. Scott gives it 6.0/10, I give it 5.5/10, and Mike give it 5.0/10. 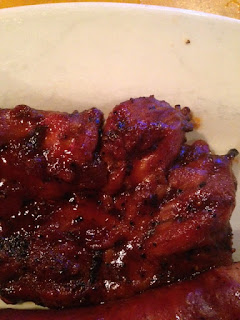 Backyard Chicken: This is boneless chicken thighs that they smoke. However, like the ribs it is covered in their BBQ sauce. And like the brisket it’s not very tender (again, like it was left out just a bit too long). There’s a hint of noticeable pepper on this one that saves it from being as low as the brisket. Mike gives it 7.0/10. Scott and I give it 6.0/10.


I have to admit I went into Bone Daddy’s with some preconceptions given the nature of the business. However, while the BBQ there isn’t outstanding, it’s a perfectly acceptable place to go for a meal. The food is decent, they have some good sides, and the service is exceptional…


Which leads to the disclaimer I mentioned earlier. If you aren’t familiar with Bone Daddy’s, be advised; it’s a “Breastaurant”. They follow the Hooters model, and their twitter site even says, “Funky BBQ joint filled w/ smokin' hot women serving killer food & ice-cold beer!”


This is a model that’s done quite well for several chains since the early 90s, and there’s no reason to think they’ll go away anytime soon. You can usually count on great service, and Callie took good care of us. At Bone Daddy’s they even bring out hot towels at the end of your meal. On the other hand, it’s probably not the best place to take a date, and your mileage may vary on whether or not you want to bring your family there (there were two families there during our visit, and not just Dads with the kids).
(Scott's Comments): This location is along 183 North, near the 3M facility, across the street from three auto dealerships, other banks and not far from other large businesses, so it's got a good location for those who work in the area. Happy Hour from 2-7 pm is also likely to be a good enticement to stop in, even if you're running errands in this part of NW Austin.


Looking at the menu, there's considerable space on it to their sandwiches and specials. Keeping that in mind, this is probably not meant to be a quintessential Texas BBQ experience, but that casual, here for some decent bbq and a beer (or other fine spirit - looking at you Crown Royal).


Is it worth a visit? Yes. The food is solid and it looks like a good place to go for a lunch (or to take Al when he’s visiting from Marco Island, where the median age is 63).
(Al's comment): We're trending upward in age; I'd say it's like 60 now.


Is it worth a trip? Nope. If you’re traveling 60 miles or more just for BBQ, there are definitely better places.
-Tom & Scott & Mike
at 5:00 PM