Line Perception (or "How Long am I Really Waiting for this BBQ?")

Let me start by saying that I owe Franklin BBQ an apology. While I’ve always agreed that their BBQ is excellent, I’ve always wondered if it was worth the wait when there’s so much other great BBQ in the area. Even if they are the best BBQ in town*, are they so much better that they are worth waiting 2 hours for once they open (not counting any time before then)?


However, my experience at La BBQ, combined with looking back at my experience at Micklethwait and what I saw at Franklin has led me to re-evaluate lines. Part of that is because I realized that the perception of the line at Franklins may be worse than the line itself (or rather, other lines may be just as bad). ﻿
Let me start with what happened at La BBQ today (8/1/15). They open at 11:00 and I arrived at 10:45. I didn’t feel like I was in that long a line. It was maybe 1/3rd the length of the line I saw at Franklin’s when I went on 7/11/15. 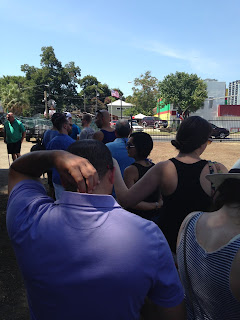 ﻿
But by 11:30 I haven’t moved all that far. I’m talking with Adrian and Roy (two people immediately behind me), and they have noticed the same thing. I hop out of line and do a quick count. At this point I am at position 50 in the line, and there’s about 42 people in line behind me. This is obviously rough because some groups have people standing in line while some are sitting down, esp. groups with children.


But still, this surprised me. Why? Because a line that seemed three to four times as long at Franklin's only had maybe 60% more people (150 or so). And from what Franklin’s staff said, it takes them about two hours to work their way through a line the length of what was there that day.


Spacing: One thing I had noticed and commented on when I was at Franklin was that the line was very spread out. In some places you might have 4-5 feet between people. This wasn’t true at La BBQ, where you had people lined up one after the other. It was a much tighter line. At Franklin’s, I had commented on Greg and his friends who were 57 people back. They were much further from the door as measured by the length of the line than the length of the entire line at La BBQ (92 people).
Line discipline: Franklin received some notice on Twitter and other social media when they clarified that one line holder equaled one order. You could not have a person hold a place in line for you and your five friends if you and your friends were then going to place 6 separate orders. I don’t know how other places handle this, but at La BBQ people were always coming in and out of the line. Some of it was common sense (parents with children taking turns entertaining the children elsewhere). Some of it involved people showing up, coming through the gate, and joining people at the front of the line. I’m not going to judge, but it does affect the wait.


Groups: It may take longer for them to put together a big order, but it’s almost always faster than putting together multiple smaller orders. A good place to watch this in practice is the grocery store and express lines. Assuming the two cashiers have approximately the same speed, one person with 30 items will get handled quicker than two people with 10 items each. Simply put, payment is a big slowdown, and the more times people are paying, the more things slow down. Try it yourself sometime, The next time you and four friends go somewhere, instead of making 5 separate orders, have one person make the order for all 5 and pay that person back (unless they are rich). You’ll notice it’s a little quicker.


Venue: For whatever reason, the less formal the venue the slower it seems to go. Trailers almost always seem to be slower than places in actual buildings. This may be because limited space means fewer people can help with preparing orders.


Bottom line: A lot of things can make a line go fast or slow, and the actual length of the line is only a small part of the process. I had seen this at Micklethwait back in May, but didn’t put it together until just now.


But I had been judging Franklin’s in part because of the length of their line, and that’s obviously a more complex issue that I realized. So I apologize.


* For the record, I’m not saying Franklin’s is or isn’t the best BBQ in the area. They certainly have that reputation. If I ever weigh in publically, I’ll let you know. *