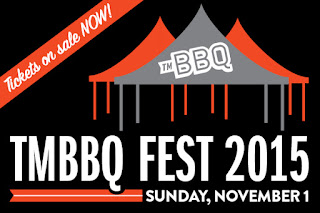 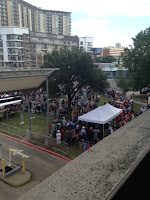 In doing BBQ reviews, it never hurts to learn a few new things and explore the BBQ landscape. With that in mind, Nov. 1st was chance to visit a delicious meeting of the meats. What is it exactly? Well in their own words:
Every year, we invite the restaurants on our Top 50 BBQ Joints list to the TMBBQ Fest, an event like none other. Sample from the best purveyors of smoked meats the state has to offer , and enjoy a day of great music, cold beer, and fascinating barbecue shop talk.


Our cast of reviewers:
(Scott's comment: Texas Monthly threw a BBQ festival for my birthday! How thoughtful!)
(Sherrie’s comment: “And it never will”)
We arrived at various times, but were all together and inside about 1:15pm. One clever thing they did was put the festival map on the back of fans, making finding places easy and comfortable. Sherrie and Tina had staked out a table and we went on various runs bringing back samples. We ended up trying about 11 places (which ones varies as Sherrie and Tina had made a run before we got in, and they left before we did).


This was our first festival, and we learned a few lessons:
*Most of the tastings were actually pretty substantial. Two people could get a pretty good taste off of them. Next time we’ll get one from each place for two people, which allows room for more food. By the time we’d reached tasting number 10, we’d started filling up.


*We may also start learning to eat in line. We spent huge amounts of time waiting in line and carrying samples back to the table (although we’d get two or three on each run). If you taste one while waiting in line for the next, you save a ton of time. 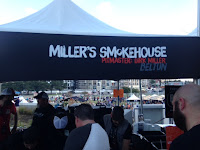 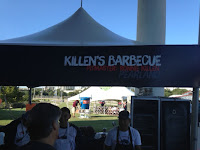 Places tried: We did try a wide variety of places (between 9-11 per reviewer). For the most part they were all places we hadn’t tried before. 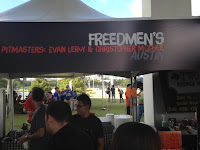 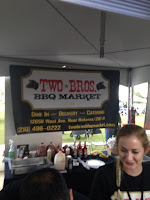 Disclaimers: Not everything from every place was tried/rated. We also know that this is not necessarily going to be an accurate representation of how the food normally is. We’re not using this as a benchmark for whether a place is worth visiting or not.


With all that out of the way, let’s get to reviewing:
(As always, scores are 0-10 scale. Scoring for the most art is average of all scores) 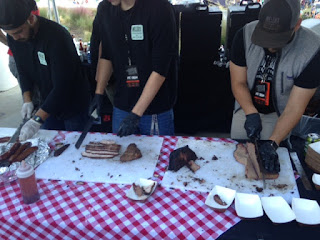 Poultry: There were only two poultry items we tried. Two Brothers had chicken and Miller’s had turkey.


Two Brothers had a BBQ chicken that got much higher reviews, ranging from 8 (Tom), 8.5 (Tish and Scott) to 9 (Sherrie). And I will admit that my score was an 8 because while I liked the sauce (it was pre-sauced) I found it a touch overpowering. Still, they did a good job with it. Avg: 8.5
Winner: Two Brothers 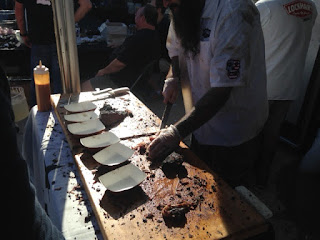 Pork Loin and Pulled Pork: We were able to try either pork loin or pulled pork from the following places: Coopers, Cousins, Franklin, and Lamberts.


Coopers: Sherrie was the only one who tried their pork, and gave it a 6. Avg: 6


Cousin's: Cousins pulled pork was reasonably tender and had some smoke flavor, but seemed to be a little dry. General consensus is that this is one that needs sauce. Scores were 5 (Tish), 5.5 (Tom), 6 (Scott). Avg: 5.5


Lamberts: Only Tish and I tried their pulled pork, but found it had a good flavor, and was tender and moist without being greasy. Scores were 8 (Tom and Tish). Avg: 8


Franklin: Franklin pulled pork divided the three of us. I find it has a good smoky flavor, is moist and tender without being greasy. Scott, finds it exceptional. Tish found it good but not quite great. Scores: 9.25 (Scott), 8.5 (Tom), 7.5 (Tish). Avg: 8.41


Pork Ribs: The places we ended up trying ribs from were Two Brothers and Killen’s.


Two Brothers had a cherry glazed rib. The flavor was excellent, but is was somewhat tough. Tish really liked hers despite the toughness and gives it an 8.5. Scott and I give it a 6 because of the toughness. Avg: 6.8.


Killen’s rib was nice and tender, with a good crust and good flavor. It was very well prepared. Tom gives it a 9, and Tish gives it an 8. Avg: 8.5 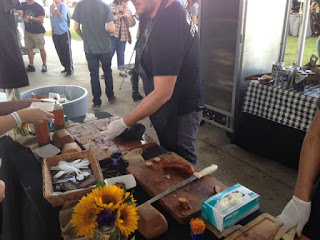 Sausage: There was lots of sausage to try, with most places doing some form of spicy sausage. Read on though, because two of the more interesting things of the festival happened in the sausage category.


Note: I (Tom) don’t like jalapeño. I like heat just fine (Sherrie has seen me eat ghost pepper salsa), but I don’t like the taste of jalapeños. As a rule, assume that my score is probably 2 points lower than it would be for someone who likes jalapeño.


Cousin's: They did a spicy sausage with cheese. It seemed reasonably tender and moist, but they were giving small slices. 5 (Tom and Sherrie), 6 (Tish), 7 (Scott). Note: They were very small slices and my piece was mostly cheese. Avg: 5.75


Freedmen’s: Freedmen’s had a rather interesting sausage – cheese, tortilla chips, jalapeño, spices. I describe it as a chicken tortilla soup sausage. Tish describes it as a Nacho Cheese Dorito. Even I kind of liked this one, although Sherrie apparently didn’t. Scores were 3 (Sherrie), 7.5 (Tom and Scott), 8 (Tish). Avg: 6.5


Lamberts: Sherrie is the only one who scored Lamberts, giving it a 4. Avg: 4


Louie Mueller’s: Sherrie is the only person who scored here, giving it a 3.
(Tom: A 3.. Really? Well, if I had any doubt that Sherrie and I often have different tastes, this would put them to rest.)
(Tish: Nice to know she agrees with me.)


Miller’s: They took a chance and went with something adventurous – a pumpkin spice sausage. Reactions were interesting. I actually kind of liked it (and I don’t normally like pumpkin). They served it with a dusting of powdered sugar. Scores: 3 (Tish), 6 (Sherrie), 7 (Tom), 7.5 (Scott). Tish felt strongly that the sugar got in the way, and this seemed to be generally agreed upon as we would all raise our score without it. Avg: 5.86
(Al's comment: Dear Lord! Enough with pumpkin spice everything!)


Franklin: I did Franklin out of order because they were the source of probably the biggest surprise of the day. Apparently they started a new sausage recipe 10 days before the festival (I asked). The results are … mixed.


First the positives. I think we all agreed that the sausage was well smoked. It had good texture, snap, and was nice and juicy. They gave large enough pieces that you could really get the characteristics. However, where it lacked was the flavor department. There was definitely uncertainty as to how much we liked it. Tish thinks they are using whole pickling spice as a seasoning.


As for me… Well, I had two pieces that seem to have been from the end of different links. On each of these pieces, the very first taste I noted was a strong flavor of cigarette smoke. I honestly had flashbacks to my college when I used to date a smoker. In short, while I noticed a strong smoke flavor, it was not a good flavor, and it colored the rest of the flavors for me.


I think some of the scores are as high as they are only because the smoking/preparation quality itself is so high. Scott might order it again, but Tish and I probably wouldn’t. Scores: 5 (Tom and Tish), 6 (Sherrie), 6.5 (Scott). Avg: 5.63 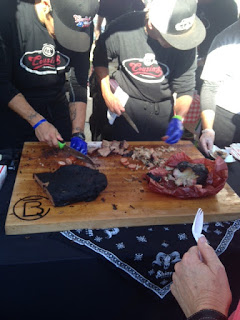 Brisket: And finally, the king of Texas BBQ. When you talk Texas BBQ you are talking brisket first and foremost. In fact, it was a very bold move of Two Brothers to not serve it (and they were the only place we tried that didn’t have brisket).


Cousin's: Cousin's turned out a nice solid product with solid flavor and decent bark. It was moist and tender. Scores: 6 (Tish), 7 (Sherrie, Scott, Tom). Avg: 6.75.
Cranky Frank’s: Cranky Frank’s may be better than scores are going to show because someone messed up. Scott and Tish really liked their pieces, and found them tender with a nice bark and good flavor. Unfortunately, what I got was a large piece of nothing but fat with no meat at all. Since you get rated on what you serve, it was flavorful fat, but fat nevertheless. Scores: 5 (Tom), 8 (Scott and Tish). Avg: 7.


Franklin: As to be expected Franklin turned out their usual excellent product that was moist, tender, and had a good bark. As with most of the top tier joints, it’s always about flavor and they do an excellent job even with their lean (they were sampling both moist and lean).  Scores: 8 (Tish), 9 (Scott and Tom), 10 (Sherrie). Avg: 9.


Freedmen’s: Freedmen’s brisket had some variation among us. It was reasonably tender and moist, with decent flavor. It’s always possible Sherrie got a bad piece as she didn’t like it that much. Scores: 3 (Sherrie), 6 (Tom and Tish), 7.5 (Scott). Avg: 5.63


Hutchins: Hutchins turned out a really nice brisket, with good flavor, nice bark, and nicely moist. We were all pretty consistent on this one. Scores: 8.5 (Scott, Sherrie, Tom), 9 (Tish). Avg: 8.63


Killen’s: Tish and I were the only ones who tried their brisket. It was reasonably tender and moist, with a decent bark and good flavor. Scores: 7 (Tom and Tish). Avg: 7.


Lamberts: Sherrie is the only one who scored Lamberts, giving it a 5. Avg: 5


Lockhart Smokehouse: Showing that flavor is in the eye of the beholder, Lockhart Smokehouse divided me and my wife. I found the flavor of their smoke just a little bit off-putting, while she really loved it. It had good bark and moistness. Scores: 7 (Tom and Scott), 9.5 (Tish). Avg: 7.83


Louie Mueller’s: Sherrie is the only one to score their brisket, giving it a 6. Avg: 6.


Miller’s: Miller’s turned out a solid entry, with good flavor and bark. It was moist and had a decent amount of smoke. Scores: 6 (Sherrie and Tish), 7 (Tom and Scott). Avg: 6.5


Tyler’s: Tyler’s had a strong smoke flavor. Almost overpowering as there wasn’t a lot of other flavor. Decent bark. Scores: 6 (Tish and Tom). Avg: 6


With all of that done, what would be our recommendations of the places we’ve tried? Well, Franklin (Austin, TX) is an obvious choice. It won two categories pretty solidly. Also, while you hear about the lines there, it’s a unique social opportunity that is worth experiencing at least once.


Hutchins (McKinney, TX) also gave a very strong performance. If you average our scores for each product they presented, Hutchins (8.06) actually beat Franklin (7.68). That bears close scrutiny. Next time we visit Tish’s folks we may have to make a day trip to McKinney.


Scott is very excited about Two Brothers (San Antonio, TX). It’s not far from his folk’s house, and the cherry glazed rib did taste wonderful.


And finally, Miller’s (Belton, TX) and Freedmen’s (Austin, TX). It’s good to see they are both willing to take chances with some unusual sausage combinations. They seem worth checking out on that basis alone.
at 10:30 PM